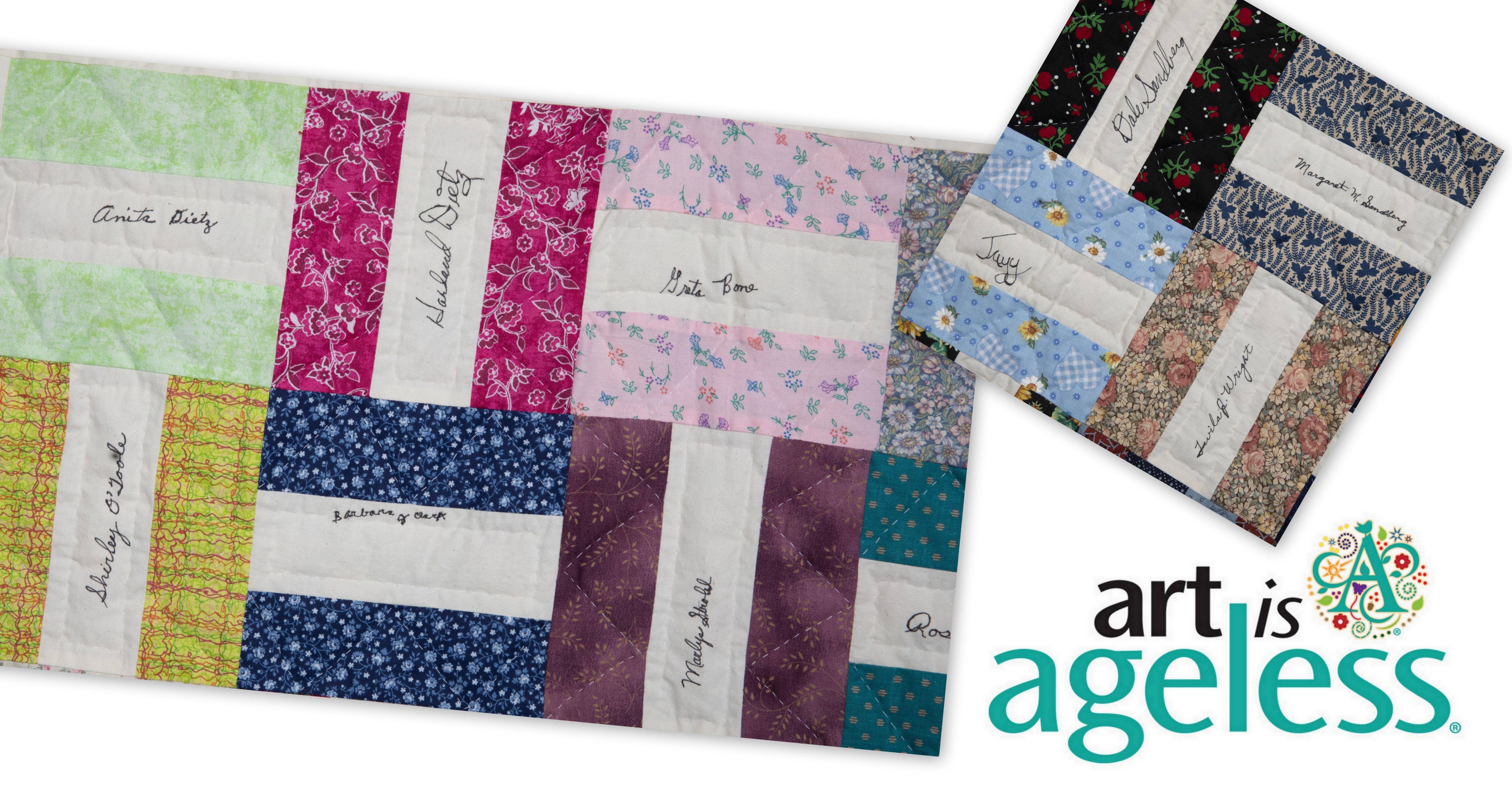 Peggy Shrewsbury’s “Friends” won the top amateur prize in the 2021 Art is Ageless® competition at Topeka Presbyterian Manor, but 30 of her neighbors also contributed to the project.

“Friends” is an autograph quilt, a commemorative style that dates to the mid-19th century.

The quilt honors the friends Peggy has made since she moved to Topeka Presbyterian Manor four years ago. She asked each of her neighbors to sign their name to a piece of fabric. Each of the quilt’s 30 blocks includes one of the signatures.

“I’ve met so many wonderful people since I’ve been at the Manor,” Nancy said. “People I’ve eaten lunch with in the dining room or played bingo with. A lot of us have become close, and I thought it would be a nice way to remember them.”

In the fall of 2019, Peggy carried a box of fabric and a fabric pen around with her to collect signatures from her neighbors.

When it came to choosing fabric for “Friends,” she turned to a trusted source.

“My daughter is a much better quilter than I am, and she has gobs and gobs of fabric,” Peggy said. “She filled a tote bag with a lot of bright colors, and I chose fabric from there.”

“Friends” features floral, paisley and polka-dot patterns in a full spectrum of colors. Peggy machine-stitched the blocks together in a simple but pleasing geometric grid. She hand-quilted the piece together, including the interlocking hearts stitched around the border.

“I think it turned out pretty cute,” she said.

Peggy learned how to quilt around 30 years ago. It was something she’d always wanted to do, and she had more time once her children were “leaving the nest.” Her quilts “12 Month Quilt” and “Arizona Retirement Adventures” won Art is Ageless blue ribbons in 2018 and 2019, respectively. She planned to enter “Friends” in the 2020 Art is Ageless competition, but last year’s event was cancelled due to the pandemic.

Recently, Peggy started a new quilt project: a quilt for one of her grandsons, made from concert T-shirts he’s collected over the years.